Filippo Ganna is an Italian professional cyclist who races for INEOS Grenadiers. He is the current Hour Record holder with 56.792 ridden, and is a five-time individual pursuit World Champion on the Track, aswell as Olympic Champion at Team Pursuit. On the road, he is a two-time World Champion in the time-trials where he's specialized, aswell as a winner in several top stage-races, including six stages throughout his two appearances at the Giro d'Italia.

Filippo Ganna was born on the 25th of July 1996 and hails from the northern part of Italy, from Verbania - a well-renowned location for pro cyclists to train and live. Sure enough Ganna emerged from the right location, and has evolved to become one of the most successful riders and time-trialists in the history of cycling, gathering many of the most important titles a rider of his specialty could aspire to.

He is the son of former Italian Olympic canoer Marco Ganna and is in a relationships with Carlotta Morino. As an Italian and current rider of INEOS Grenadiers, Ganna rides his home country's bike brand of Pinarello, which he's used to great success over both disciplines. He has one of cycling's longest-standing contracts, lasting all the way into 2027 with a salary reported to be of €2 million euros. During the 2020 pandemic lockdown, Ganna rode 463 Watts during a 55-minute indoor race. His FTP would (taking into consideration the indoor bike aspect) be somewhere of around 450-470 watts, making him one of the most powerful riders in the peloton when it comes to raw power.

Ganna entered competitive racing within the younger ranks back in Italy, in which he was to take several national titles both on the road and track. Throughout the entirety of his career, Ganna was to keep combining the two disciplines with great success. On the Track, he took the junior national title in the individual pursuit in 2014, and the Elite title in the same event in 2015. It was however in 2016 that he broke through in the international scene, taking the under-23 European title and the Elite World title again in the individual pursuit.

2017 saw him win the Elite European Championships in the event, and in 2018 he once again took the World title. He added to that an European title in Team pursuit. In 2019 and 2020 he took on both occasions the World title in the Individual pursuit. In 2021 he won the World again in the Team Pursuit together with his Italian teammates, and again conquered the title in the Olympic Games. In 2022 he returned to the track after a complicated season on the road to take his 5th title in the individual pursuit.

On the Road, Ganna had shown his talent as a junior rider, earning himself a stagiaire contract with Lampre-Merida in 2015. He was a relatively unknown figure however, but in 2016 he rode with Team Colpack, winning the under-23 Paris-Roubaix, national championships time-trial and the Elite GP Laguna Porec in Croatia. He also rode to 2nd place in the under-23 time-trial European Championships, enough to convince Lampre's rebuilt structure, UAE Team Emirates, to sign him as a 21-year old into the World Tour.

He race for the UAE team in 2017 and 2018, revealing immense physical capacity but with modest results. 2017 would see him only ride to 5th in the modest field of the Tour of California's time-trial, but in 2018 he impressed early in the season to finish the Vuelta a San Juan in 2nd place behind Remco Evenepoel - who had beaten him in the time-trial. However Ganna was unable to perform at a high level throughout the whole year, coming close but not being able to win the Italian time-trial nationals, and not nearing a win elsewhere. INEOS Grenadiers had picked up on his talent, and signed him into the 2019, providing him with the structure and focus he would take advantage of to become the dominating face in the discipline.

On his very first day with the team Ganna took a win at the Tour de la Provence time-trial. He rode a full classics campaign in support of the team, but only at the national championships did he return to his winning ways finally conquering the title. He then rode to 6th in the European Championships ITT, won the time-trial at the World Tour BinckBank Tour and rode to 3rd place at the World Championships behind Rohan Dennis and Remco Evenepoel. In 2020 however, his streak of domination would begin. Following the pandemic break Ganna would go on to win the national championships time-trial, then ride into the win on the TT of Tirreno-Adriatico, and later on storm into the win as the new time-trial World Champion at home in Imola, where he beat Wout van Aert and Stefan Küng.

Ganna's collaboration with INEOS had reached it's objective. However, the Giro d'Italia still layed ahead, and Ganna was one of the figure of the race, having assisted Tao Geoghegan Hart to the overall win, but most impressively taking a whole four stage wins throughout the race, including all three individual time-trials  by a comfortable distance and stage 5 which featured over 4000 meters of climbing where he managed to hold off the peloton.

2021 started off with two consecutive stage wins - including the final time-trial - at Etoile de Bessèges, and shortly after one at the UAE Tour. Ganna would go on to prepare for the Giro d'Italia once again, where he won both time-trials on stages 1 and 21, effectively winning every single time-trial of the 2020 and 2021 editions at the Corsa Rosa. He would begin to show cracks in the armour after however, failing to win the national championships, and then riding to 5th place in the hilly Tokyo Olympics course. He then finished second at the European Championships, beaten by Stefan Küng. He bounced back from this less good period afterwards in Leuven however, as he beat home riders Wout van Aert and Remco Evenepoel to take his second consecutive rainbow jersey.

2022 was a very mixed year. Ganna started off his season in stellar form, winning the time-trial at Etoile de Bessèges, and quickly after the prologue at the Tour de la Provence, which he led from first to last day, but was disqualified on the final stage where he'd seal his podium position due to an illegal bike change. He then finished second at the UAE Tour's time-trial, but won at Tirreno-Adriatico. Ganna saw his potential at Paris-Roubaix and targeted it to conclude his spring, but mechanicals saw him far from the fight for the win. He won the national championships, but the Tour de France that followed was very difficult.

Ganna finished 4th and 5th respectively in the time-trials at his Grand Boucle debut, emerging disappointed from the race. He then finished third at the European Championships, and could only manage 7th at the Wollongong World Championships. He won the prologue at the Deutschland Tour but it was a very little taste of victory in comparison to his ambitions.

In 2022, INEOS Grenadiers planned a tilt at the Hour Record with Ganna, a pure time-trialist and track specialist. His attempt was first scheduled for August, but postponed due to physical issues, as teammate (performance engineer at INEOS) Dan Bigham took up the spot and beat the previous record with 55.548 kilometers. Eventually, on the 8th of October, it was Ganna's time to make his effort, and he demolished all previous records by riding 56.792 kilometers in one hour, in a bike/equipment setup that had been estimated to cost around €75.000 euros, a masterpiece in performance and engineering.

Read all the latest news about Filippo Ganna 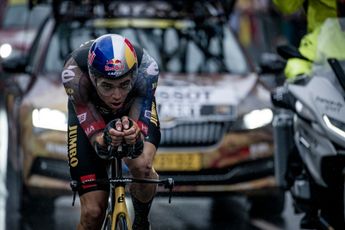 Cycling's governing body the UCI, have rectified a rule regarding team cars in time trials after a flurry of teams recently b...

Iljo Keisse has early in October retired from road racing, and at the Six Days of Gent he's said his goodbyes from track raci... 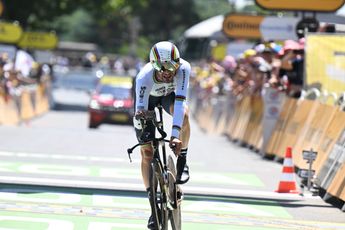 Filippo Ganna has revealed where he will start 2023 season

Filippo Ganna has just recently ended his season with a stint on the track, having taken a new Hour Record record, and then b... 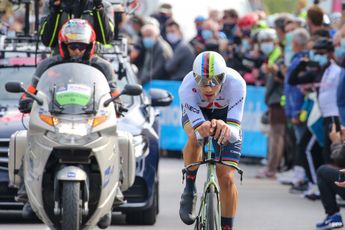 Everything about... Filippo Ganna - The new time-trial king and Hour Record holder

Filippo Ganna is an Italian professional cyclist who races for INEOS Grenadiers. He is the current Hour Record holder with 56... 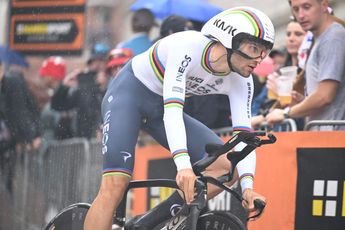 Filippo Ganna describes Hour Record pain: "I wanted to fall off just to put an end to the agony"

After a long and mixed road season, Filippo Ganna returned to the track to finish off 2022, with a new Hour Record success an... 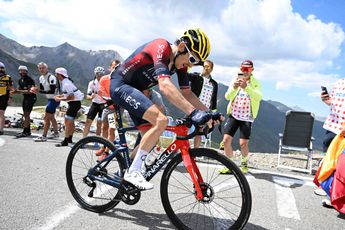 Geraint Thomas and his teammates recently tried their luck in football as the team paid a visit to the training ground of the...

The incredible Filippo Ganna made yet more history by breaking the Individual Pursuit world record on his way to claiming gol...

Great Britain have been crowned Men's Team Pursuit world champions after emerging victorious against Italy at the UCI World T... 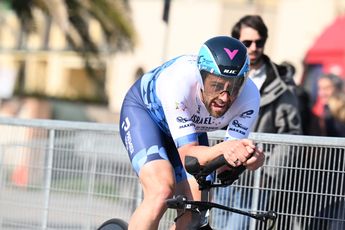 Filippo Ganna’s new hour record is the talk of the town. A debate has already started regarding who is capable of beating the...