Remco Evenepoel is a Belgian cyclist, currently riding for Quick-Step Alpha Vinyl Team. He is most known for being the country's first Grand Tour winner in decades and the current road race World Champion, who has also achieved a victory at Liège-Bastogne-Liège. He is one of the sport's leading figures, with one of the steepest ever rises within the sport, after turning professional directly out of the junior ranks, and into the top of the cycling world.

Remco Evenepoel was born in the 25th of January 2000 and has became one of, if not the most successful road cyclist to be born in the 21st century until today. He was born in cycling-loving Belgium in the city of Aalst, and has a particularly interesting career that is unlike almost any other rider in the peloton. Son of a former pro rider, Patrick Evenepoel, the Belgian rider found his talent only after featuring in the youth teams of Belgian and Dutch football teams R.S.C Anderlecht and PSV Eindhoven. At age 15 he broke his pelvis in a football injury, and eventually began cycling afterwards, realizing his talent. At the age of 17 he made the transition.

Remco Evenepoel has a contract with Quick-Step Alpha Vinyl Team until 2026 and is believed to have a salary between €1 and €2 million euros. He has gotten married in October 2022 to wife Oumaima Oumi Rayane, his long-term partner, who is a model and ambassador for Specialized - the bikes in which Evenepoel races. He uploaded (and later removed) his power data from the 2022 Volta ao Algarve which revealed he's done an effort of approximately 6.4W/Kg for 38 minutes. It is hence believed his FTP is between the 6.1-6.3W/Kg range.

Everything about... Egan Bernal - The Tour de France winner with the most impressive comeback story in modern cycling

Evenepoel has not been shy of crashing, unfortunately. It is recollected that he broke his nose the first time he raced outside of Belgium at 17. Badly timed, he crashed in the 12th stage of the 2022 Vuelta a Espana whilst leading the race, eventually without major damage. The fall that has affected his career the most however was at the 2020 Il Lombardia. Descending the famous Muro di Sormano, the Belgian hit a small road wall in a bridge and crashed down a ravine. It was a terrifying experience for all involved - as the pictures show. Evenepoel suffered a broken pelvis once again and a lung contusion. His recovery was lengthy, and only 9 months after did he return to competition, at the 2021 Giro d'Italia.

His career however began earlier. When he started he was directly at the junior ranks, but Evenepoel left a mark immediately. In 2017, his first competitive season he's won some races both at national and international level, however it was his 2018 season that really brought the attention of many. That year, Evenepoel was by far the most successful junior, and according to FirstCycling's rankings, he has experienced the most successful season a junior rider has ever recorded. His success was so extreme that he scored that year more than half the points of second placed rider - his now teammate Ilan van Wilder.

That year, Evenepoel won 25 races, including several stages and overall classifications. In one occasion, he's won both stages and all classifications available at the Hungarian GP Général Patton Juniors. Evenepoel was double (road race and time-trial) winner in the Belgian, European and World Championships with complete success. The most impressive feature however was how in almost every single occasion he won solo, without competition aside. In the European Championships he arrived almost a whole 10 minutes in front of his closest competitors - current World Tour pros Alexandre Balmer and Carlos Rodríguez. This shocking amount of talent that was visible attracted the attention of many World Tour teams, and he was secured a top contract with immediate effect, skipping the under-23 ranks entirely - a move which has stimulated a trend that is becoming increasingly frequent in the peloton.

Under the wing of Quick-Step Alpha Vinyl Team and Patrick Lefevere, he had the promise to be guided and slowly work into the ranks of professional and world-class cycling. He won the youth classification in his first race at the Vuelta a San Juan, and he had a calendar avoiding the bigger races and peloton. At the 2019 Hammer events he's shown to be already at the level to win, helping massively the Belgian team to win races in both Stravanger and Limburg events. In June he won the Baloise Belgium Tour after winning in his familiar style, with a solo move on a hilly day. He's won again in the same way at the Adriatica Ionica Race in July, setting him up for his first big pro win as a pro rider. The Clasica San Sebastian, where he was famously dropped in the main climb of the day, returned and attacked from the peloton ahead of the final ascent, and won solo. The week after he won the European time-trial Championships, and later on in the year he went on to finish second at the World Championships, confirming his status already as one of the world's best in the discipline.

2020, the year of the pandemic, had him planning to make his Grand Tour debut in the Giro d'Italia. It was a small race year for Evenepoel, only with 23 days of racing, but wild success as over the year he only raced in stage-races, four of them, and won the overall classification in every single one - with stage wins achieved aswell in every single one. Vuelta a San Juan, Volta ao Algarve, Vuelta a Burgos and the Tour de Pologne. A more efficient season could've hardly ever been imagined. His plans were cut short at Il Lombardia however, as it was mentioned above, due to a career-threatening crash that risked ending a career that could - and can go on to do historical things.

Recovery was slow and lengthy. Extreme media pressure has constantly been part of his story throughout the past few years, with many comparing him to Eddy Merckx, and setting unrealistic goals for the Belgian rider, a man who had only ridden bikes for a few years. This pressure saw him return to competition at the Giro d'Italia after a 9-month break. Although he initially showed good form, in the second week of the race he began to suffer from fatigue, and went on to abandon the race in the final week with no result to show for. His talent was unchanged however, as soon after he bounced back to take another title at the Baloise Belgium Tour.

Later in the summer he won the Druivenkoers - Overijse Classic, the Brussels Cycling Classic and the Coppa Bernocchi. Although he had the form he couldn't net a big win, despite being close - with podium results in the European and World Time-Trial championships, and the European's Road Race. His recovery however was being completed, and in 2022 Evenepoel showed the best version of himself, and one who fulfilled the almost impossible expectations that many had on him. His season began immediately with a win at the Volta a la Comunitat Valenciana, where he finished second in the overall classification. Weeks after he took a dominant win at the Volta ao Algarve.

Many began doubting his mountain-climbing abilities, specially as he rode into a modest 11th position at Tirreno-Adriatico, and later fourth at Itzulia Basque Country. His training in the spring revolved around the classics however, and he put that into use at Liège-Bastogne-Liège where he took a solo win after an attack at the top of La Redoute, in what was an incredibly popular win. Soon after he won the Tour of Norway, but claims that he not to be a climber soon emerged again as he finished outside the Top10 at the Tour de Suisse - despite having won the final time-trial. He won the Belgian time-trial Championships right after. However in the second half of the season Evenepoel shifted his focus onto climbing, lost weight and prepared for the Vuelta a Espana.

He took another dominant win at Clasica San Sebastian, this time however making a difference in the uphill. He was an outsider for the Vuelta, however in the race's first summit finish he put on a massive performance to take over the red jersey and distance most of his rivals meaningfully. What followed was a three-week race where Evenepoel showed a new version of himself, very calm and collected even in moments of pressure, consistent in the many summit finishes, and always in control even when he was dropped in the second week. Signs of weakness were overrated, as in the final week he resisted all attacks from Enric Mas, and sealed the first Grand Tour victory for Belgium in decades.

This was to be an almost perfect season for Evenepoel, but would only improve afterwards. A third place at the time-trial saw him in form for the 2022 Wollongong World Championships, however it was in the road race that he would go on to make damage. Again in his traditional style, his attacks saw him go solo with 25 kilometers to go, and into a comfortable win that would see him put on the rainbow stripes for the first time as an Elite rider.

Read all the latest news about Remco Evenepoel 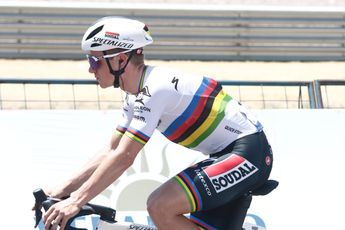 “ It wasn't a smart move rather a bit stupid”: Remco Evenepoel recalls his attack at 10 km to the end in stage 5 of Vuelta a San Juan

Remco Evenepoel was the first of the favorites to make a move in Alto de Colorado during stage 5 of Vuelta a San Juan. The Be... 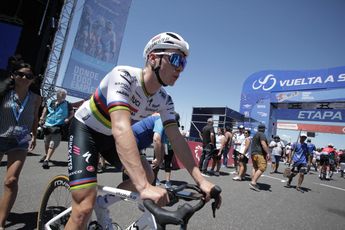 Alto Colorado queen stage "will be a test, but more to see how I feel" for Remco Evenepoel

The Vuelta a San Juan will have it's queen stage today at the Alto Colorado where the overall classification should be decide... 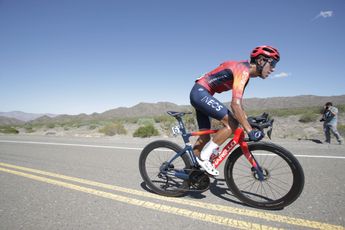 "A bit of a suicide attempt": Remco Evenepoel calls Egan Bernal move in yesterday's stage at Vuelta a San juan

Remco Evenepoel celebrated his birthday yesterday at stage 4 of Vuelta a San Juan on Wednesday. The now 23 years old rider of... 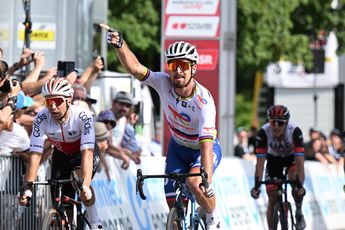 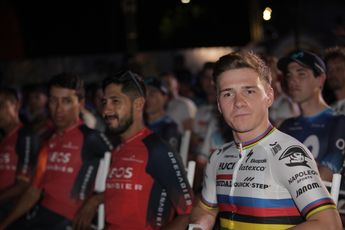 Remco Evenepoel: "This victory is good after a bit of bad luck yesterday"

Soudal - Quick-Step had a chaotic start to the Vuelta a San Juan, but on the second day they've been able to make up for it w... 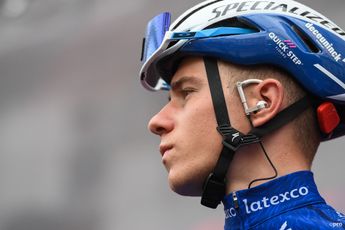 The opening stage of the Vuelta a San Juan was one for the sprinters, however not all made it to the finish safely. Fabio Jak... 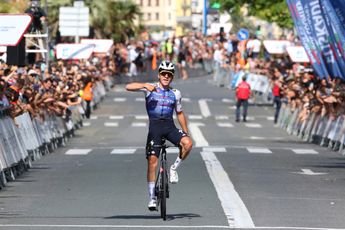 Patrick Lefevere: When we go to the Tour with Remco Evenepoel that will be without a sprinter

Soudal - Quick-Step have for many years had clear ambitions for the Grand Tours, packed with stage hunters and sprinters.With... 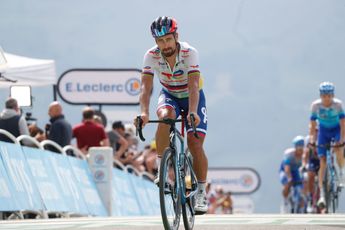 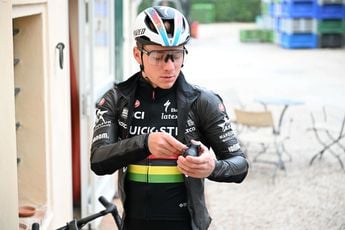